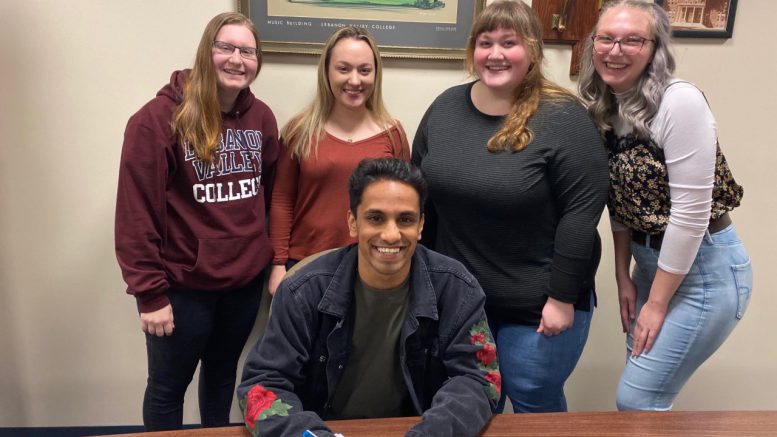 VMG began its search for its 2020 artist early in the semester with a content submission deadline of Jan. 31. After reviewing submissions, the group selected four finalists and hosted a showcase featuring these students at Ted’s of Annville. The finalists selected for the VALE 2020 Artist were Emmy McManaman, Devin McKibbin, Ben Gordon and Shawn Mathews. Ultimately, Mathews won out and has begun to work alongside VALE members to record music that will be released later in the semester.

“We are beyond excited to be in the recording and marketing process with him,” Aimee Bealer, freshman digital communications major and head of the VALE marketing department, said.

Mathews is a sophomore audio and music production major and is no stranger to performing on campus.

Apart from his activity with VALE, Mathews is involved in Wig & Buckle where he performed as Seymour in their 2018 production of “Little Shop of Horrors” and Lamar in their 2019 production of “Godspell.” He also participates in other musical theater shows off campus where he has performed in “The Little Mermaid,” “Mamma Mia” and “Joseph and the Amazing Technicolor Dreamcoat.”

“Being the VALE artist is a great experience because it allows me to collaborate on music and ideas with a bunch of different people” Mathews said. “It gives me a lot of resources I wouldn’t otherwise have.”

Mathews places his style of music under the pop category but doesn’t consider it to be the “normal” style of pop that comes from artists like Taylor Swift or Maroon 5. Mathew’s style incorporates touches of alternative, electric and hip hop to create a more unique sound.

The unnamed EP, which is produced by students in the VALE Records class, will be released on April 14.