By Marj O’Neill ’21, staff writer
The LVC dance team will once again have its Dancing with the LVC Stars event, which is similar to the television show, Dancing with the Stars.
In the show, the ‘stars’ are celebrities who are paired up with professional dancers and compete for a mirror ball trophy. In this case, the celebrities are LVC professors and staff who are paired with dancers from the dance team and instead of just competing for a trophy, they also compete for a charity of their choice. Dance team members walk around during the show to collect money for each of the charities chosen by professors and staff.
The dancing pair who collects the most money for their charity wins the mirror ball trophy and half of the money raised is donated to their charity.
“I am most excited to see our digiCOM team this year with Dr Kline and Professor Samuel,” Lizzy Ramsey, sophomore dance team member, said. “There’s been a lot of hype for this team and a lot of poorly photoshopped promos going around. We’re expecting them to put on a good show.”
Dancing with the LVC Stars is on Friday, Feb. 21 at 8 p.m. in the Blair Music Center. 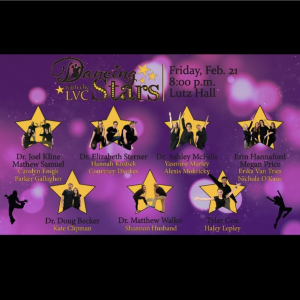 Above: The featured dance pairs for this year’s Dancing with the LVC Stars.
Photo provided by: LVC dance team