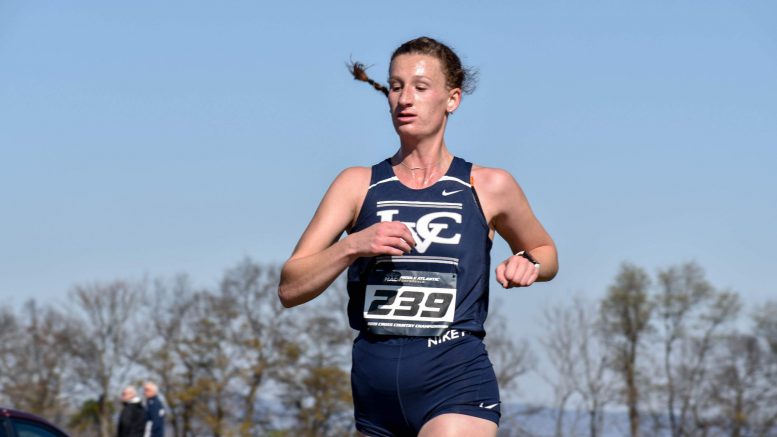 After leading the women’s lacrosse team to a MAC championship victory last year, two-time captain, Julia Brewer, knew she wasn’t done competing at the collegiate level quite yet.

As a graduate student in the physical therapy program, Brewer decided to run into the world of cross country and track & field after a successful four years as a member of the women’s lacrosse team. She was contacted by cross country head coach, James O’Brien after she was encouraged to join the team by friends.

“Coach reached out to me over the summer about joining and I thought it would be a really cool opportunity to try something new and meet a bunch of new people since I wouldn’t be with the lacrosse team anymore,” Brewer said.

Little did Brewer know that this opportunity would land her MAC Rookie of the Year honors following her 15th place finish at MAC cross country championships in November. With cross country wrapped up, Brewer now has her sights on the track & field season where she has already snatched a first-place finish in the mile at the Dutchmen Invitational on Jan. 17, with a MAC qualifying time of 5:40.12.

“I’m excited for the rest of the track & field season,” Brewer said. “I think cross country prepared me physically for races and lacrosse prepared me mentally for the competition of it all. It will be fun to combine both of those pieces during the rest of the season.”

For Brewer, being a student athlete is important to her success in the classroom, especially in the physical therapy program. It’s the busy schedule that keeps Brewer on top of her assignments as her classes and practices force her to use her available time wisely. Competing as a student athlete has also helped her to prepare for her future as a physical therapist following graduation.

“I think that being an athlete for my whole life combined with everything I’m learning in school has given me an even deeper appreciation for how the body works,” Brewer said. “Physical therapy is also a collaborative profession because a whole team of people are involved in a patient’s recovery. So, I definitely think that playing team sports prepared me for that aspect as well.”

The track & field team will be back in action on Feb. 8 at the Alvernia Invite where Brewer will be competing in the 5000m event.