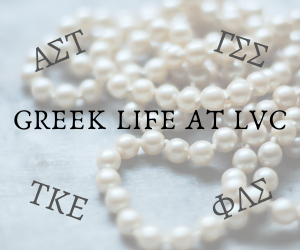 Popular blockbusters like “Neighbors” and “The House Bunny” depict Greek Life as huge groups of immature young adults whose sole purpose of attending college is to party and become popular. Even much less adult films like “Monsters University” perpetuate the idea of hazing new members, idolize being popular and advertise partying to be a staple of Greek Life.

Greek Life at LVC, and across the country, is not like the movies. Hollywood exemplifies a small percentage of reality when it comes to Greek Life. Yes, there are chapters of organizations that prioritize having fun over bettering their community, but these are the minority.

Most chapters of Greek Life are involved in at least one philanthropic organization or event, focus on bettering their members and their relationships with each other and the community and give their members ample opportunity to develop leadership skills.

At LVC, this is the reality. Our Greek organizations commit their time and talents to multiple philanthropies and projects, put effort into making meaningful relationships with their members and the community and work with one another to foster relationships at LVC and support one another as friends.

Standards at LVC and many of our Greek organizations’ national headquarters require a minimum cumulative GPA of 2.5 to be considered in good standing or active in the chapter. This means that members of Greek Life are held to academic standards and prioritize academics over everything, including Greek activities.

“Greek Life not only bonds people for life but also gives individuals life skills that they can use in personal and professional experiences,” Alex Detweiler, president of LVC’s Greek Council and Alpha Sigma Tau, said. “Overall, Greek Life is a very positive community that helps individuals grow.”

Hollywood does not accurately represent Greek Life. Members of LVC’s Greek Life do not dare their brothers or sisters to participate in dangerous stunts or harmful situations; they do not throw ragers where they outwit the police who show up to bust them. They are not brainless or self-centered or focused on winning the affection of others.

You will most likely find members of LVC Greek Life in the library for all hours, signed up for Redbook service trips to Downtown Daily Bread or AFCA, hanging out with one another and strengthening their friendships, making bracelets for women at SARCC, raising funds for St. Jude’s, selling t-shirts to support the Semper Fi fund and supporting each other in every way possible.