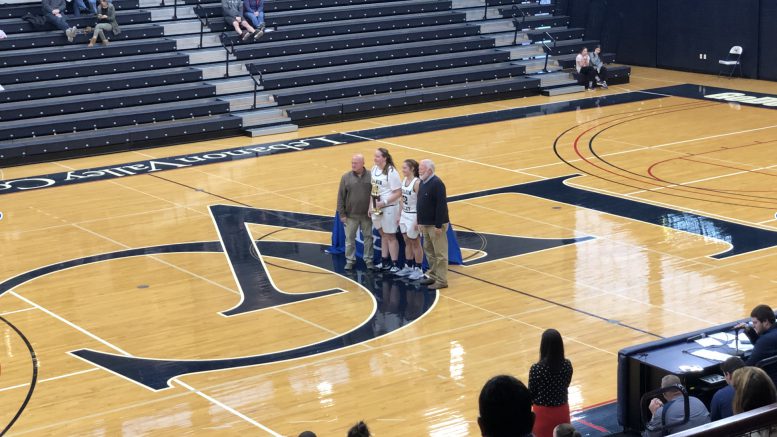 After dropping their first two games of the year, women’s basketball aimed to get back on track this weekend in their annual Rinso Marquette Tournament, held at the Louis A. Sorrentino Gymnasium.

The team tipped off with Saturday evening action against Mount Aloysius College (MAC). The Dutchmen led for nearly the entirety of the game, rooted in a 9 point run to end the first quarter of action. After that, it was all Dutchmen; junior Emily Mealey led the way with her third straight double-double of the season, totaling 17 points and 13 rebounds, while freshman Jaime Youngkin and freshman Kennedy Kuffa also recorded double-doubles in their offensive march.

The 54-41 win over MAC was the Dutchmen’s first of the season and punched their ticket to the Rinso Marquette Championship game on Sunday afternoon against No. 13 DeSales University.

The ladies faced an offensive juggernaut for the championship, with undefeated DeSales defeating Salisbury University by the score of 75-59 in the opening game of the tournament. DeSales entered Sunday’s action having scored a total of 144 points in their first two games of the young season.

DeSales opened the game by scoring 12 points before the Dutchmen were able to get on the board. LVC was unable to rebound from the early deficit despite their unwavering effort. Mealey continued her star performance with yet another double-double, but it wasnt enough. No. 13 DeSales walked away with the championship, taking the game in conclusive fashion by the final score of 79-41.

The young Dutchmen squad walked away from the tournament with second-place hardware as well as individual awards. Both Mealey and Kuffa received All-Tournament honors for their weekend performances.

Women’s basketball returns to action on Wednesday, Nov. 20, at 7 p.m., as they continue their home stand against Marywood University.