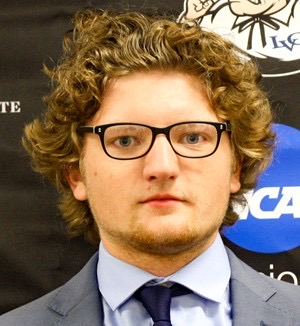 Richardson made several dazzling saves to help the Dutchmen snap a four-game skid and earn their first conference win.

“It was unreal,” Richardson said. “It felt amazing to help the guys get a conference win.”

Along with the series of big saves Richardson provided, he consistently stifled the Manhattanville forecheck by getting out of his crease and relieving pressure by moving the puck to his defensemen. Richardson explained that playing the puck is an important part of his game.

“I like to go out and handle the puck a lot and help out my defenseman and try to help move the puck up-ice,” Richardson said. “I think it helps settle me in the game, especially if I’m able to make a clean tape-to-tape pass.”

The Dutchmen held the Valiants scoreless through the first two periods of action. In the third, Manhattanville finally broke through on the powerplay to pull within two with over half a period to play.

With 10:36 remaining in the final frame, Richardson made the biggest save of his young career when he slid across to make a highlight reel glove save on Valiants forward Alex Rowella after a loose puck found him unmarked on the back post. The Dutchmen held on and earned a massive conference win in front of their home fans.

“I saw their player sitting there and the puck sort of just found it’s way through everyone,” Richardson said. “I just tried to seal the ice with my pad and track it into my glove.”

The Dutchmen resume conference play this weekend when they hit the road for a pair of road matchups against Utica and Nazareth.