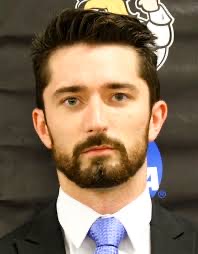 The men’s ice hockey team has a new face in net this season with the arrival of junior transfer goalie Henry Burns.

Burns joins the Dutchmen after spending his first two years back-stopping Nichols College in Massachusetts. During his time at Nichols, Burns appeared in 19 games and registered a 2.22 GAA with a .916 SV%.

So far, Burns has started all four games for the Dutchmen and was named MAC defensive player of the week following his dazzling performances during the team’s opening weekend in New Hampshire.

Burns, a business major, noted that academics played an important role in his decision to come to LVC.

“I came because I knew the school had a good reputation academically,” Burns said. “I also liked how it was a small student body, so it felt like I was right at home on my visit. Hockey was obviously a big part of it and I felt this was a good spot.”

Burns is expected to play heavy minutes for Coach Don Parsons this season. After being a backup at Nichols, Burns is already adjusting to the role of being a number one goaltender at the NCAA level.

“I think I’m adjusting well to the bigger work load,” Burns said. “So far it’s been an easy transition, it hasn’t been too much of a difference.”

The Dutchmen are back on the ice on Nov. 12 when they host SUNY Cortland at 5 p.m. at Hersheypark Arena.