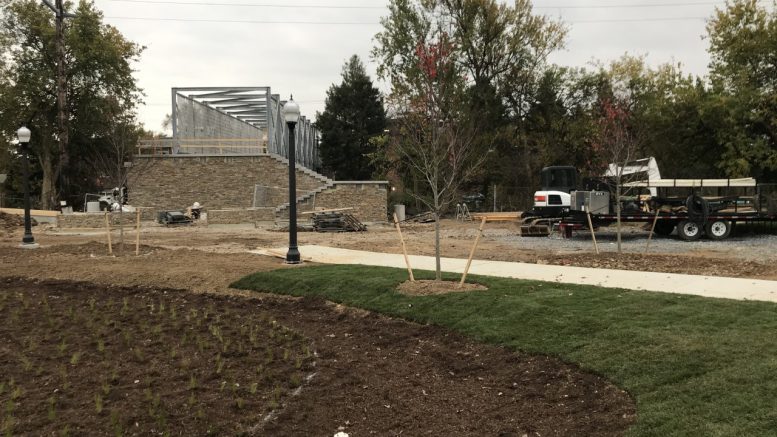 The completion of the pedestrian bridge connecting the north and south sides of campus has been delayed again.

The footbridge will not be completed by its Nov. 8 deadline because of issues sourcing and fabricating the grade steel needed to complete the north and south ramp girder sections. The bridge, which was originally intended to be completed by the start of the fall semester, was slotted to be accessible mid-October and fully completed by early November.

Due to varying issues in its construction, accessibility to the bridge was delayed to mid-November, but with the latest material setback, the completion has been pushed back yet again with no new completion date announced.

“We are working diligently to source the grade of steel required for the ramp girder sections and to identify a fabrication shop that has the equipment to cut the 40-foot-long section to the specifications developed by the engineer,” Shawn Curtin, vice president of finance and administration, said. “As soon as I have a commitment on when the girders can be delivered to the job site, a definitive schedule for completion will be developed and communicated.”

Another road-block the construction process has faced over recent months has been scheduling issues with required personnel. Crew members are unable to work over the railroad tracks without having a Norfolk Southern representative on sight.

The bridge crosses over two active Norfolk Southern rail lines and the corporation has specific guidelines that must be followed. According to Curtin, this means that without a representative available, the construction team must adjust their schedule accordingly.

“The project remains challenging with all the coordination required among Norfolk Southern, the architect, the engineer, the construction manager, and all of the subcontractors performing work on the bridge,” Curtin said.

Students are required to use the sidewalk along State Route 934 to travel to and from the north and south sides of campus. As the project is delayed closer to November and December, weather conditions may prove to be unideal for students walking along the alternate route.

“It’s really disappointing,” Kayla Heiserman senior English major, said. “Many students have commitments off-campus and having to walk along a main road to get to our vehicles takes more of our time and energy as well as puts our safety at risk. It’s just upsetting.”

While the completion date of the bridge is still up in the air, Curtin stated that the bridge will not be granted a temporary inspection approval to allow students to access the bridge prior to its full completion. The bridge will require an inspection by an engineering firm representing Annville Township before it can be used.

“The campus community understands the importance of the project and has been patient and understanding,” Brent Oberholzer, director of public safety, said. “The temporary inconvenience will soon be forgotten and the finished project will enhance both travel and the aesthetics of LVC.”

The dedication ceremony for the bridge has also been postponed. The new dedication will take place in the spring with no specific date set at this time.