Mini-THON, an event the LVC Team For the Kids (FTK) club normally holds in November for pediatric cancer, was canceled.

Mini-THON is a smaller version of Penn State’s THON, which is a philanthropy event that raises money and awareness for pediatric cancer through a large 46-hour dance marathon on campus. The funds go towards Four Diamonds, a charitable organization based out of Penn State Hershey Medical Center, that strives to conquer childhood cancer.
“We are not having our traditional event this year due to low attendance but high effort and costs from the previous year,” Norene Miller, the president of the FTK club said. “We are partnering with Alpha Phi Omega (APO) to have a casino night where students could play casino games, go on blow ups, sing karaoke, earn raffle tickets and eat free food.”
LVC’s version has been in the Arnold Sports Center, centered around a specific theme, which included performances from the dance team, the acapella group, Treble at the Valley and a live band. The event also had various games, activities and a lantern event with a moment of silence for all those affected by cancer.
“The first 200 students who sign up on Redbook for the event were able to get into the event for free, but all other students after that have to make a $5 donation to the Four Diamonds”, Miller said.
The FTK club hopes to be able to have the Mini-THON event on campus again in the future. 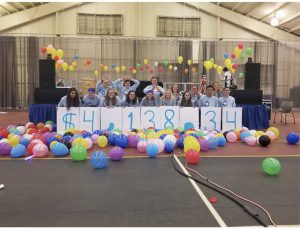