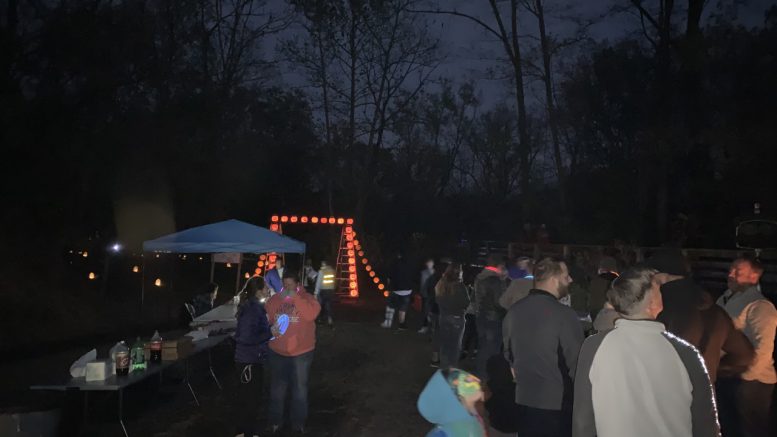 As part of an annual tradition, LVC student clubs organized a Halloween event for local children at the popular Quittapahilla Park.

On a cool night in Annville, dozens of families showed up to the town favorite “Quittie” Park to take part in an annual Halloween event put together by ten of LVC’s student clubs. The event, known as the Pumpkin Walk, was free of charge, but donations were accepted to help fund park projects. Additionally, items such as glow sticks were sold, with proceeds also going to the park.

The Pumpkin Walk started near the entrance of the park under an arch of lit decorative pumpkins. There were hundreds of milk gallons with candles inside of them lighting the way along one of the park’s nature trails. Families gathered under the arch at seven o’clock and were led in groups by a tour guide to various stations along the lit path. There were eight stations in total, and each featured a Halloween themed activity for children to participate in.

The first station along the trail had children color two paper brains, which were then stapled to a long strip of construction paper and made into a headband for the kids to wear during the entirety of the walk. In the second station, children were given paper plates to draw faces on, which then had strips of toilet paper attached to them to make ghosts. The third station then gave families a sheet of construction paper, a paper skeleton head, q-tips and glue to make their own skeletons. The next station on the Pumpkin Walk featured cutouts in the shape of hands on black construction paper, and families were then given q-tips and glue to make their very own skeleton hands.

The fifth station switched things up a bit from arts and crafts, and the kids lit up once they reached it. Each child was given a clear plastic glove and was told to fill it with as much candy and as many small toys that were scattered across the table as they could. The sixth station of the walk had a miniature graveyard set up with pre-made, miniature ghosts laying in it. Each ghost had a string attached to it so that the kids could swing them all around in the air so that it looked like they were flying. The seventh station drew a great deal of excitement from both the kids and their parents, as three separate bowls were set up and everyone was to stick their hands inside and guess what they thought it was. The last station was another arts and crafts station, featuring small cutout pumpkins that the children decorated and wrote their names on.

The annual Pumpkin Walk at “Quittie” Park was a well-organized event that drew a large crowd. From the set up of the event to the creative activities for children, the Pumpkin Walk was surely a highlight of Annville’s Halloween season.