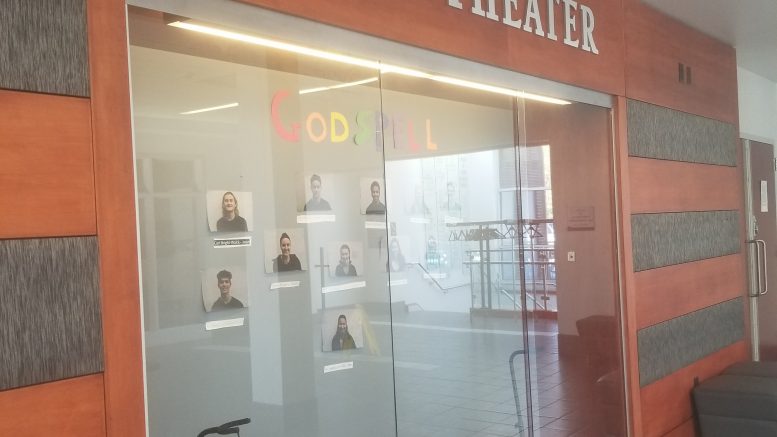 The Wig and Buckle theater company had nearly a full house for the opening night of “Godspell.”

While not every seat was occupied, Leedy Theater bustled with other LVC students, friends and family of the cast. Cast members got to enjoy and feed off of the reactions from the audience. Though “Godspell” featured some slower, more emotional songs, the majority of the show consisted of lively, choreographed numbers. Cassandra Martin, a sophomore English and creative writing double major, is Wig and Buckle’s producer and commented on the opening night’s energy.

“Everyone kept the energy up throughout the show and the audience seemed to respond very well to the humor and the music,” Martin said.

Martin also functioned as assistant stage manager for “Godspell.” She expressed that opening night was smoother than their previous rehearsals, though she has hopes the tech crew would continue to improve in the following shows.

“I’m a huge proponent of the fact that an actor can always improve their craft,” Martin said. “I would also say the same thing for the tech crew. We can always be smoother.”

Chiara Meyers, also a sophomore creative writing and English double major, starred as Sonia/Red in the show. She admitted that the cast had nerves on opening night, but that from a performance perspective, it was successful.

“Everyone gave it their all, as always,” Meyers said. “I think that we will definitely be able to beat this performance due to the immense effort and ability that everyone involved has contributed to make this production great.”

The show opened on Oct. 25 at 8 p.m. with five following performances. The last show will be on Nov. 3 at 2 p.m. All shows are free for LVC students. Students and the public alike can look forward to Wig and Buckle’s next show “Almost, Maine,” which will be directed by Meyers. “Almost, Maine” will run from Jan. 31 to Feb. 2.