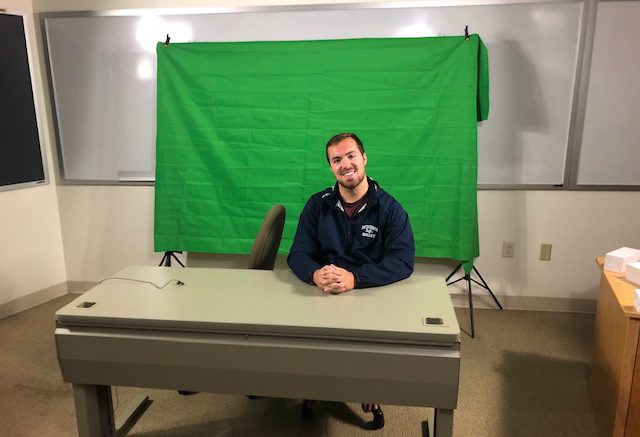 The show is called Coffee with Connor and is hosted by Connor Matsinger, a sophomore business major and defenseman on the men’s hockey team. Matsinger humorously delivers updates on athletics and other school news. Coffee with Connor provides a great opportunity for viewers to stay updated on their favorite sports teams, while also getting a glimpse at how athletes interact behind the scenes.

“I hope viewers can watch it and get information about different teams and events at the school,” Matsinger said. “I want to have it come across in a more convenient and comical way.”

What started as a simple iPhone-produced series that mainly discussed hockey news has evolved into quite a production. New to the series this year is a musical introduction based on the hit television series “Full House,” a new green-screen “studio” and a team of dedicated editors who provide images and graphics to give the series a more professional look.

Each episode carries a different theme, based on the guests. Themes so far this year include: captains, rookies, goalies, and dual-sport athletes. Guests usually start by answering a few questions about their sport or academic life before they get a chance to answer some more light-hearted questions. It’s a great way for viewers to see the athletes’ personalities outside the lines.

“My favorite part is interacting with the interviewees,” Matsinger said. “I love getting positive feedback around campus that people enjoy watching the show.”

Moving forward, Matsinger intends to keep the series going throughout his time at LVC and hopes to see the show continue to evolve.

“I want to see it grow in viewers obviously, but more than that I want it to be something everyone on campus uses to get information about what’s going on with their favorite team or club,” Matsinger said.

For students interested in tuning into Coffee with Connor check out the LVC men’s ice hockey page on Instagram.