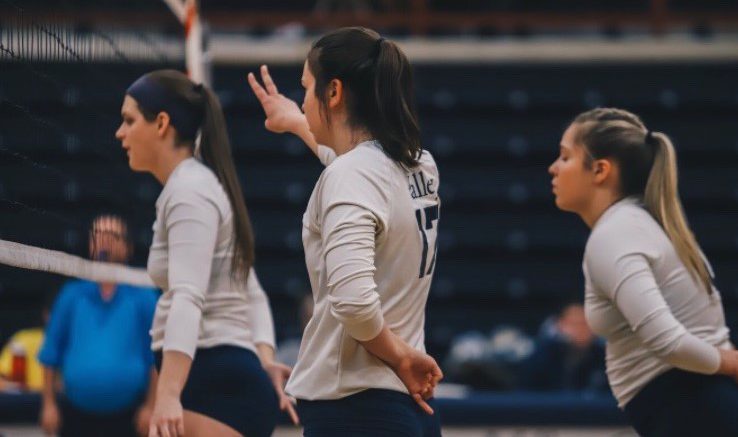 The volleyball team is set to take on the second half of its season and finish out conference play with hopes of advancing to the MAC playoff tournament.

Halfway through the season, the young squad is sitting just above .500 with an overall record of 12-10. The team began conference play on Sept. 11, against Arcadia University where it ultimately lost 3-2 after the tough five set match. Its most recent conference win came from Hood College on Oct. 15, where it swept the Blazers 3-0. Other conference wins for the team came from Albright College and Alvernia University earlier in the season. The Dutchmen are sitting at 3-2 in conference play with their second loss coming from Stevenson University.

The team was ranked to finish fourth in the MAC preseason poll, and it will need to pull out some big wins against other conference competition to reach the MAC playoff tournament.

“Every conference match is important for us at this point,” Jayna Class, junior captain, said. “Messiah will be a very tough match, and they are going to put up a strong fight. Widener and Lycoming will be two key matches as well.”

The 11-player team is comprised of only three upperclassmen with five freshmen filling a significant chunk of the roster. Despite the team’s youthfulness, it is as confident as ever in its abilities to reach MAC playoffs and finish the season strong. The leadership of the upperclassmen will prove to be an important component in the success of the team as it finishes up regular season play.

“The upperclassmen are good with the freshmen,” Wayne Perry, head coach, said. “No one takes offense when someone provides input, and the younger players don’t feel intimidated by the experienced players. The upperclassmen have shown great energy and determination and it’s contagious.”

The Dutchmen’s next match will be part of nonconference play against Marymount University on Oct. 19 in Arlington, Virginia.