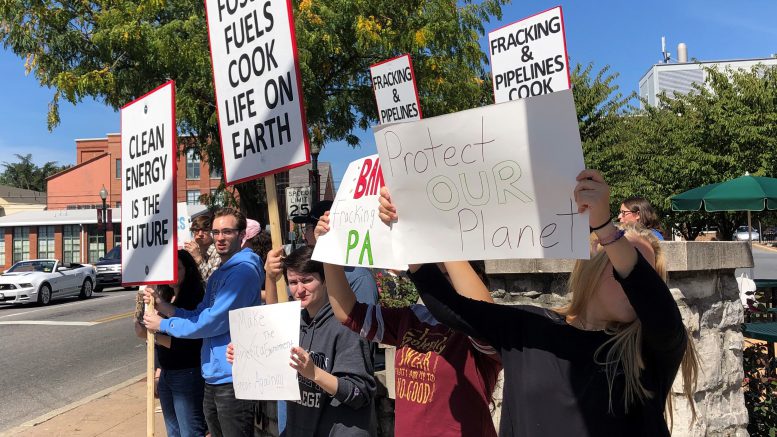 Students protest outside of Subway at the Annville Town Square. Photo by Hannah Shirey

Students in the First Year Experience class People and the Planet organized a Climate Awareness Walkout on Friday, Sept. 20. The purpose of the walkout was to bring attention to climate change.

The walkout was a part of a worldwide movement of young people that are demanding political leaders take climate action. The global movement is asking students of all ages, races, genders, nations and faiths to strike together.

The United Nations Climate Summit, which took place on Sept. 23 in New York, inspired Ariana Genna, a freshman in the FYE class, to initiate the LVC walkout.

“We just wanted our voices to be heard,” Genna said.

To hold the protest, students had to get a permit from the police. They also had to advertise the event to LVC and the Annville community.

“There is a lot that goes on behind the scenes of a protest,” Genna said.

The class also created signs and posters that protesters could use during the walkout. Among other things, the signs promoted ending subsidization of fossil fuel interests, banning fracking and ending denialism.

About 60 people attended the protest that was held at the Annville Town Square.

“We had a pretty good turnout. Everyone that was there was really passionate,” Genna said.