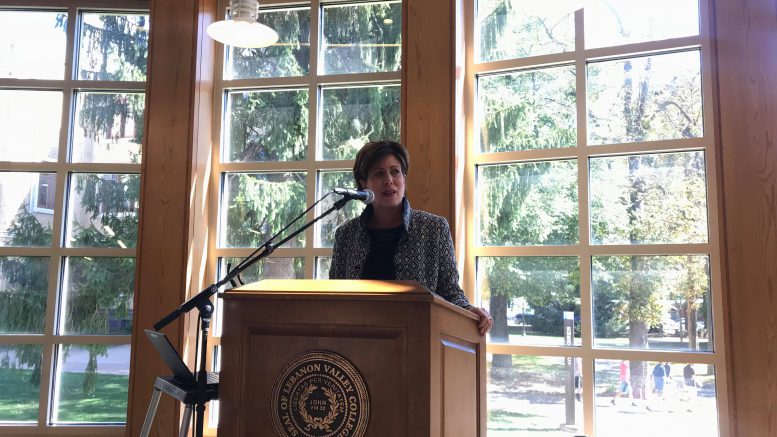 A federal judge visits LVC to talk about what the Constitution means to her.
Since 2005, LVC, alongside many institutions nationwide have honored Constitution Day with an event such as a guest speaker. In 2004, the United States Congress took the step of establishing a national mandate declaring Sept. 17 as Constitution Day. This year Chief Magistrate Judge of the US District Court for the Middle District of Pennsylvania Susan Schwab gave the talk.

“What exactly does this document mean to us, it was drafted 1786 in secret,” Judge Schwab said. “When thinking about this, I have to be truthful. Throughout my time as a young girl growing up in Wilkes Barre, Pennsylvania, in a large Italian American family, where I was the first woman ever to go to college in my family, I can say the Constitution meant absolutely nothing to me.”

Judge Schwab discussed how as a law student she learned about the important document, but it wasn’t until she became a federal judge that she understood what the Constitution means to her and the people in her court.

“I am here to tell you the Constitution is alive and well by ordinary people through ordinary people,” Judge Schwab said. “Mostly inmates, I can say if there is any group of people that raise constitutional issues in courts; it is prisoners.”

Judge Schwab concluded her talk by discussing the case of a woman who sought to marry a man who was incarcerated and was refused to be issued a marriage license. After writing a handwritten to Judge Schwab’s court, the judge settled the situation without a court ruling.

Judge Schwab had lunch with some students and visited classes in the afternoon.