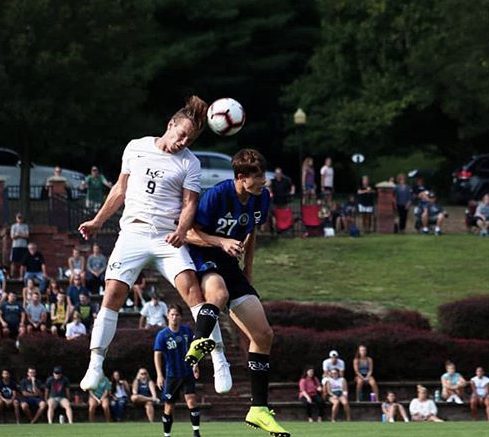 LVC’s men’s soccer team is more determined than ever to reach its goal of an NCAA tournament appearance despite an overtime loss against No. 17 Franklin and Marshall College in its opening game.

The Dutchmen have high hopes for success this season despite a 2-1 OT loss against Franklin and Marshall College on Aug. 30. The Dutchmen’s lone goal came from junior Kurtis Rineer in the 58th minute off a free kick from 20 yards out. The game was evenly matched through the first half, but Rineer’s goal created a brief separation until the Diplomats put one away just 10 minutes later. The Dutchmen were unable to capitalize on any other opportunities in the second half despite F&M losing a man in the 85th minute due to a red card.

The match ultimately went into overtime where the Diplomats earned a penalty kick that would finish the game.

“Honestly, we believe we were the better team and that we should have won the game,” Charlie Grimes, LVC’s men’s soccer head coach, said. “Our mentality will continue to be focused on our two core values: we love one another, and we walk like champions.”

The team is coming off a 10-6-1 overall record from the previous season and is looking to improve with its sights set on a conference championship that will lead them to the NCAA tournament. The team has had tremendous success in its past seasons despite not qualifying for the NCAA tournament as it won the ECAC tournament in its 2016 and 2017 seasons.

“I’m aiming big,” Braydon Shuck, junior forward, said. “I want to win NCAA’s. I mean, that would be the greatest. We’re all aiming high. We’re treating every game on a need to win basis.”

Key conference games for the Dutchmen will include Messiah and Lycoming with the hope of capturing the conference.

The Dutchmen’s next home match will be against Eastern Mennonite University on Sept. 21 at Herbert Field.