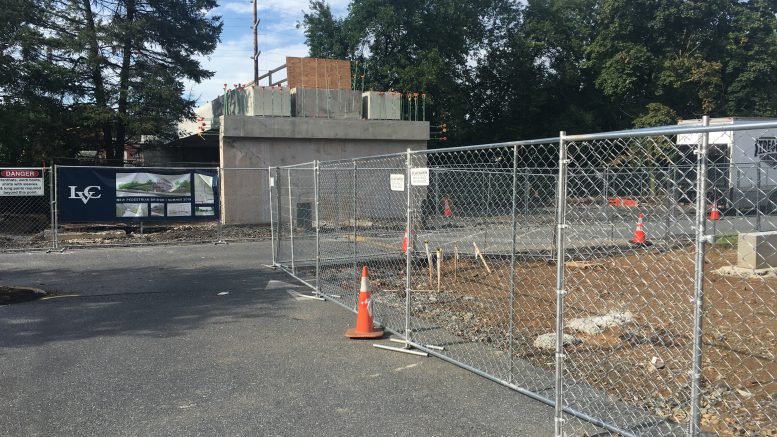 The idea for a redesigned, ADA compliant pedestrian bridge at Lebanon Valley College has been in the making for several years, and necessary approvals were obtained in time to begin reconstruction this past May.

However, due to unexpectedly extended timelines for approvals and coordination, the bridge will not be finished in time for the start of fall semester; instead, the project will be accessible mid-October and fully completed by early November.

The footbridge connects the north and south sides of campus and allows students, faculty, staff and community members to safely cross above the railroad tracks that separate sections of LVC.

“Reconstruction of the pedestrian bridge is part of the Campus Master Plan: to better create a walking campus and connect the north and south sides,” Brent Oberholtzer, director of Public Safety, said. “Included in the plan was LVC’s desire to make the bridge more accessible and ADA compliant.”

During the winter of 2017-18, the bridge began deteriorating at an accelerated rate due to extreme cold and corrosive chemicals such as ice-preventative salt. Sections of the concrete stairs began to break away from the structure, expediting the need for reconstruction.

“There were two main reasons for reconstructing the footbridge,” Michael Mumper, director of Facilities Management, said. “The original bridge only had steps as a means of access. Therefore, the accessibility to or from the north campus via that bridge was restricted to those who were able to walk the steps. Also, the existing bridge was beginning to deteriorate.”

Planning for the new footbridge started after LVC was awarded a grant for the project in December, 2016, from Pennsylvania’s Department of Community and Economic Development’s (DCED) Multimodal Transportation Fund. LVC then received an additional grant from PennDOT and was able to finalize the designs.

Mumper had anticipated this project to be somewhat of a challenge. Cooperation from numerous external organizations and the compressed construction timeline have made the project complicated.

Though there have been no unexpected setbacks in construction thus far, Mumper says the timelines for approvals and coordination of the project have taken longer than The College had originally expected, resulting in a delay of the project’s completion.

Parking at LVC will be affected by the new footbridge design. Approximately 25 parking spaces on the south side of campus were removed to accommodate the project. Only commuters, guests or visitors and approved residential students will be permitted to park along the tracks. Residential students may no longer park on the south side of campus, except for approved times during the weekends.

Additionally, as construction continues, pedestrians are instructed to use the sidewalk of State Route 934 to cross the tracks. LVC students are advised to alert professors if additional travel time is needed to and from classes.

No pedestrian may walk on or across the railroad tracks. Pennsylvania law allows violators to be cited with trespassing and face up to 90 days in jail and/or receive up to a $300 fine. Norfolk Southern and Annville Police departments know of the construction and may add extra patrols to ensure the safety of all pedestrians.

LaVie’s Back to the Books: New president on campus