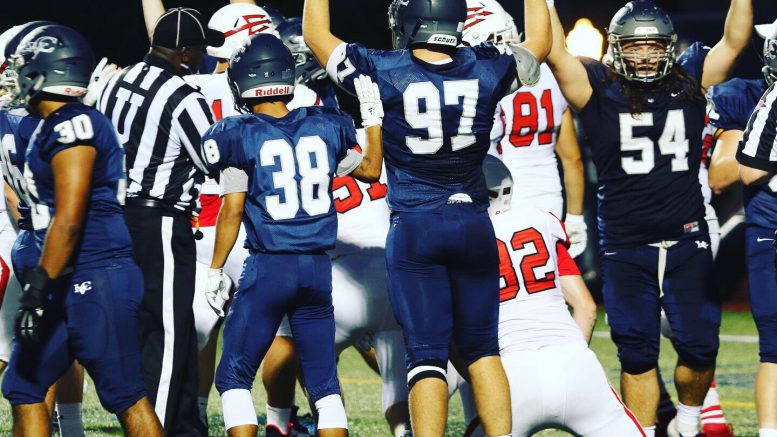 LVC Football celebrating during a scrimmage against Dickinson College earlier this preseason.

After a less than impressive 2018 season, the football team hopes to turn things around this season.

Despite multiple close games, LVC had trouble outlasting their opponents. The Dutchmen lost the first eight games of the season but managed to shift the tides with a 55-7 blowout win against Alvernia University in the second to last game of the year. LVC ended the year in dramatic fashion on Senior day by beating Albright College in double overtime, while also securing the chance to march on Kreiderheim.

“I am really excited about this team,” Joe Buehler, Head Coach of the football team said. “We had a great Spring and this group of young men is very team focused. We also have 40 high character freshmen joining us which is awesome.”

This year the team had 102 students report for preseason camp and training.

“Our only obstacle is the shortened pre-season due to new practice limitations set by the NCAA, but we will overcome this by making the most of every minute we have,” Buehler said.

Buehler is entering his fourth year as the head coach for the Dutchmen, and 16th season overall with the college. His previous twelve years were spent as the offensive coordinator and offensive lone coach. Buehler has an overall record of 11-19.

“I am definitely looking forward to the season,” Justin Abdo, junior wide receiver said. “I really think our guys are bonding together and becoming one big family each and every day. I’m eager to see how well we play this year knowing that all of the teams will be a difficult task to overcome. We as a team, are all for each other and want to see every part of our team achieve greatness leading us to overcome our difficulties.”

The Dutchmen will take on the Franklin and Marshall Diplomats in the season opener on Saturday September 7, at 1 p.m. at Arnold field in Annville.

The XFL: Yay or Nay?