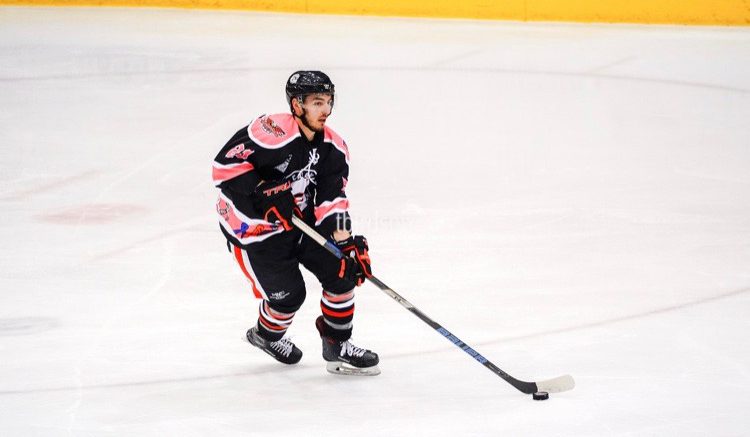 Four years after his arrival in Annville, LVC student-athlete and neuroscience major, Brad Nolan, has carved a path his younger self may have never thought possible.

The Bridgeton, Missouri native knew early in his college career that he was going to pursue a master’s degree after graduation, so the end of his senior season as a defenseman for the men’s ice hockey team was seemingly the conclusion of his time in competitive hockey. However, the Carolina Thunderbirds of the Federal Hockey League saw potential in the former ECAC West Second Team All-Star.

After joining the Thunderbirds, Nolan amassed 13 assists and a plus-13 rating in 16 regular season games to help propel the professional team to the top spot in the FHL. They’ve since won the Commissioner’s Cup as champions of the league. When asked about continuing his career, Nolan expressed his passion for the game.

“It’s been a lot of fun and a lot of hard work,” Nolan said. “Hockey is one of those sports that is nearly impossible to give up. You see guys playing until they’re 40 because they love the game so much.”

With graduate school still on the horizon, however, the 25-year-old realized another opportunity to win a competitive championship likely won’t present itself.

As Nolan and the Thunderbirds heightened their pursuit of the Commissioner’s Cup, his teammates in Annville grew more excited for him with each victory.

“All the boys were watching and supporting his journey since the day he left,” Brett Johnson, senior forward and assistant captain, said. “He was such an important part of this team for four years, it’s only appropriate he put on a great performance at the next level.”

Surprisingly, though, the second half of 2019 may be the more interesting for Nolan. His search for the right graduate program led him across the Atlantic.

“I had ideas that I wanted to go to graduate school and keep studying neuroscience and get in on new and exciting research, but I had no clue as to where that would be,” Nolan said. “I have always wanted to go to Europe since I have never been, so one thing led to another and I found the University of Pompeu Fabra in Barcelona. My master’s degree will be in brain and cognition, so I will basically be continuing to study and research in the neuroscience field, but in a more technologically-focused manner.”

Nolan has always been known among his teammates and peers as one of the brightest in any room he’s in, so this opportunity, just like the one in Carolina, is well deserved. There is so much to be excited about in the next several months for the soon-to-be graduate, but Nolan has one aspect of the expedition in particular that he is looking forward to.