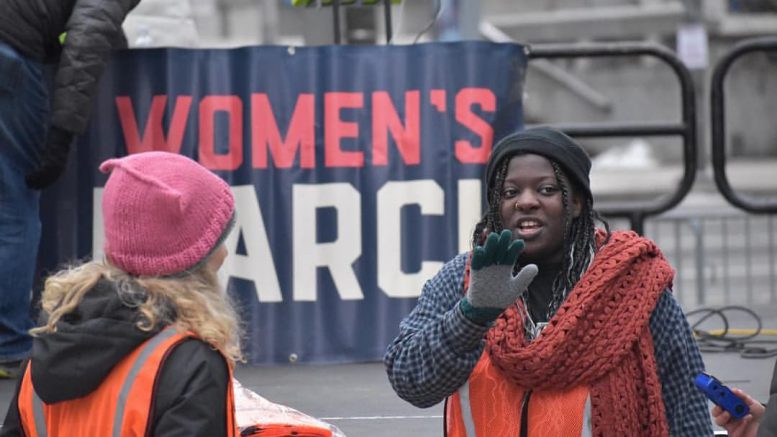 While post-grad opportunities can be both exciting and overwhelming, one LVC grad is making a difference through her political and community activism in her first year out of school.

Tamara Baldwin, ’18, believes her time at LVC served as a starting point for her career in activism. During her undergraduate years, she was a co-founder and President of the Black Student Union, President of the Feminist Collective, house leader of the Women’s Services and Gender Resource Center, in addition to other activism work.

Once a sociology major here at LVC, Baldwin is now living in Philadelphia and taking her experience with political and community activism on campus to a much larger scale. Since graduation, Baldwin has worked with a variety of organizations and events such as The Sunrise Movement, city council campaigns, and most recently The Women’s March on Washington.

The third annual Women’s March, which took place on January 19, was an incredible opportunity for Baldwin to utilize her passion and skills for activism.

“What was really nice about it was that we had a lot of autonomy in planning the event,” Baldwin said. “In a sense, we were able to go rogue and dictate what messages we wanted to be conveyed at the March. Each of us were organizers in Philly and the greater Philadelphia area, so we ended up reaching out to a lot of our connections and groups that we are involved in and inviting them to be a part of this with us.”

While her work with the March was incredibly rewarding, Baldwin had to overcome a few obstacles while helping to organize such a massive event.

“I had a great experience overall,” Baldwin said. “The greatest challenge, though, was that there were two different organizations hosting Women’s marches in the city at the same time just a block from each other, and we were not collaborating with each other. I was organizing with the nationally affiliated Women’s March. The other organization was not affiliated with the national organization, so there was a lot of work that went into navigating around that and informing the public that there were two separate events occurring.”

Additionally, Baldwin had to deal with controversy surrounding some of the leaders of the march regarding anti-Semitism. While many news platforms focused on this as a reason to denounce the march, Baldwin faced the issue directly.

Baldwin even admits that it is good to be critical of political work, even work one might be thoroughly involved in oneself.

“I’ve always been and will continue to be critical of the Women’s March,” Baldwin said. “It’s still very much mainstream liberal feminism. However, I must state that one thing that is incredibly powerful about the march is that it gathers a significant amount of people into one space and all of these people are, at the very least, unhappy with the way the world is existing around them.”

Regardless of both outside criticism and her own doubts, Baldwin feels the power of these types of movements and their potential for making changes.

“One of the most difficult steps in building a movement is building the base, and here we have this annual event that pulls thousands of people out of their homes and into the streets, and if done right, will move people from the streets into organizations doing important work in their communities,” Baldwin said.

Above all, Baldwin wants current LVC students, especially sociology majors, to know that there is an endless number of options for students after they graduate.

“Despite it feeling like that the sociology department caters to one or two fields, there are so many possible things for them to do,” Baldwin said. “Many of the people that I know doing amazing work in organizing have sociology backgrounds. I want more students to see that.”

Baldwin hopes to continue her work in organizing, while also demonstrating the opportunities available for students in the scary, post-graduation world.