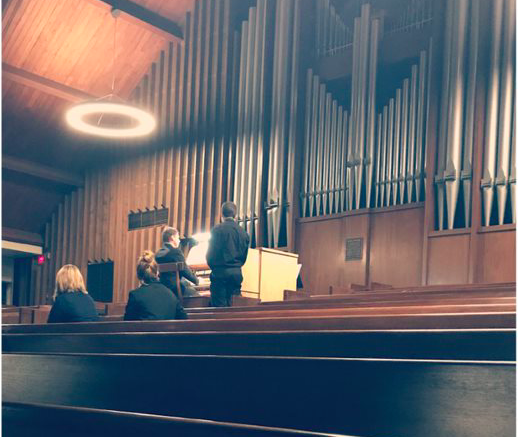 Lebanon Valley College student Patrick McMullen, a biology major and chemistry minor, got a chance to demonstrate his talents on the organ in a recital on Nov. 6.

The recital showcased a variety of pieces that McMullen had prepared for all semester.

McMullen began playing the organ while he was a high school student. As a non-traditional instrument for students, he received immense support in pursuing this interest at LVC.

“I always thought it was a really interesting instrument, allowing you to basically control an entire orchestra of sound by yourself,” McMullen said. “I had a really supportive teacher during high school, and I began playing regularly at my church.”

While McMullen enjoys his time as a science major, he finds music to balance his day-to-day life.

“Music has allowed me to be creative and expressive in ways my major does not,” McMullen said. “I do enjoy science, but music and performing is a lot of fun and a great stress reliever.”

In addition to going into agricultural research, McMullen has big plans for his future, which include playing the organ.

“This coming spring I will be playing concerts in NYC at Central Synagogue and in Camden, Maine, both with junior music major and friend, Rachel Schulz,” said McMullen. “Something I originally saw as a hobby and side job is opening up great opportunities that are both fun and beneficial to my career goals.”

McMullen also wants to debunk the stereotype of the organ as strictly a church instrument.

“There is a huge range of repertoire spanning all genres written for the organ. From full organ symphonies to works with orchestra and organ to silent film accompaniments, the organ is a very versatile instrument,” McMullen said.

For more information on upcoming student recitals and musical performances go to https://www.lvc.edu/events/.