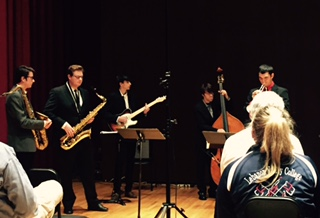 The small jazz ensemble performed for LVC students and the community in its fall recital on Friday, Nov. 16.

The recital took place on the stage of Lutz Hall in Blair Music Center. The snug setting complemented the casual atmosphere of the jazz recital and encouraged an interaction between the performers and the audience.

The ensemble’s performance, directed by adjunct instructor of music Timothy Wolfe, heavily emphasized and relied upon improvisation. The musicians composed melodies on the spot while watching and listening to each other to form cohesive and unique arrangements of the songs.

“We were particularly locked in with each other during ‘Song for my Father,’ and it was a great way to start the show,” Swayze said.

The format of jazz concerts varies each year depending on the number of musicians and the variety of instruments used. This year’s ensemble was divided into two groups of musicians, each playing five standard jazz tunes.

“I think the best part was that we had enough people to have two separate groups so each group could have their own dynamic,” Swayze said.

The small jazz ensemble will perform again in the spring semester.