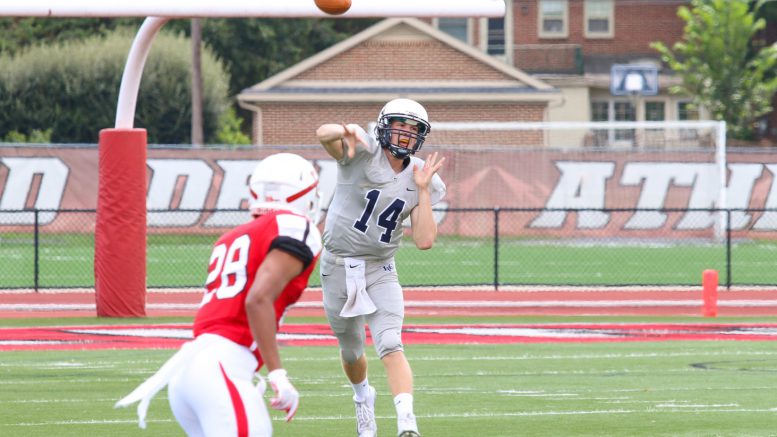 Kody Kegarise is starting to make a name for himself as LVC’s starting quarterback.

Kegarise, only a sophomore, earned the position of starting quarterback after a two-week battle between him and several others during the football team’s camp in August. Since then, he’s continued to show improvement in his game, and has no plans of slowing down.

Kegarise knew he needed to prepare himself for the position battle that would take place during camp.

“Going into the offseason I knew I had to get faster and stronger, but that wasn’t where my overall focus was,” Kegarise said. “My main goal was to master the X’s and O’s of our offense because the mental side of the quarterback position is just as important, if not more so than being able to throw the ball.”

Throughout three games, Kegarise, despite some growing pains, has shown flashes of greatness on the field. The sophomore has run for 166 yards and a touchdown, LVC’s first score of the season, as well as thrown for 322 yards and three touchdowns.

“Kody has been great for us so far,” Ryan Fink, senior running back and team captain, said. “He’s improved a lot since the spring and has a very strong knowledge of the game and our offense for being as young as he is.”

Kegarise’s improvement did not happen overnight. There was a lot of hard work that went into the elevation of Kody’s game.

“Kody would call me up all the time during the summer to see if I wanted to run routes for him,” Jared Kramp, senior wide receiver said. I could tell that he had a great desire to get better and he certainly did as the summer progressed.”

Kegarise will look to continue his early season success in hopes of veering the Dutchmen’s ship as they continue conference play.