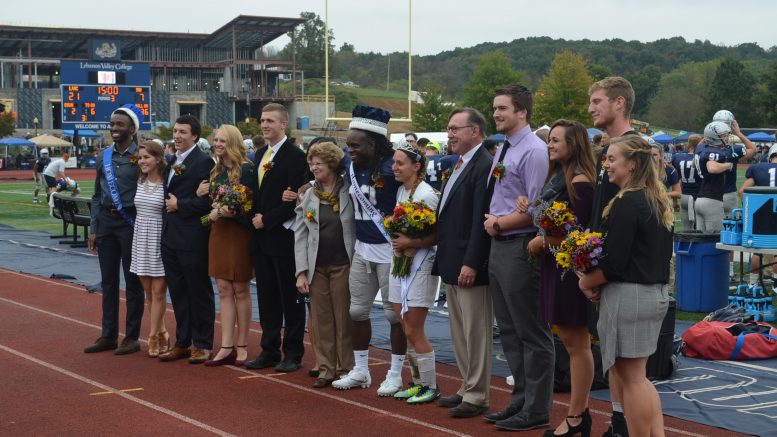 All the buzz and excitement is over, and Homecoming now falls some 365 odd days away.

Javon “Trick” Nelson, a senior business and art dual major, and Teanna Shutt, a senior physical therapy major, are LVC’s newest Homecoming King and Queen and both represent the College in an extremely positive way.

Nelson was born and raised in Tampa, Florida, and grew up playing football, wrestling and track & field. At LVC, Nelson plays football and runs for the track & field team.  In addition, Nelson is a  resident assistant, works multiple on-campus jobs and is a SAAC representative.

“I always wanted to go to school up north,” Nelson said. “ This was the perfect opportunity to do that and continue playing most of the sports I played in high school.”

Nelson is well-rounded and shows his support in many activities.  He’s enjoyed his time here, especially making friends. For Nelson, his plans are only just beginning; he anticipates returning to LVC after graduation to start his second degree in business, and hopefully go into real estate.

Nelson wishes to make an impact in the world, and he feels like this allowed him to get one step closer.

Nelson enjoyed winning homecoming king and described it as a good feeling.

“The feeling was amazing,” Nelson said. “ The only thing I saw or heard was familiar faces congratulating and supporting me to have this moment and title.”

Shutt was born and raised in Elysburg, Pennsylvania, and came to LVC because of the Physical Therapy program. However, she also admits it felt like home to her. Growing up Shutt played soccer, basketball and track and field; she continues to play soccer and run track here at LVC. Along with Nelson, Shutt is a resident assistant, holds two on-campus jobs, and is part of PT club and Christian Life.

“My favorite memory was at outdoor MAC championships running the 4×800 my freshman year,” Shutt said. “ Our last leg, Lauren Decker, caught up with a Misericordia University runner in the last 200 meters and won by a fraction of a second.”

After graduation Shutt hopes to become a traveling Physical Therapist and urges everyone to never give up.

“Capture any opportunity presented, and never view anything as a failure, but rather a lesson,” Shutt said.

Shutt explains that she was happy to see her family, friends and LVC community standing in front of her when she heard her named announced at Homecoming.

“I immediately felt this overwhelming sense of support,” Shutt said. “ Crown or no crown, I am beyond blessed to call LVC my home.”

For both Nelson and Shutt this was a special experience because they were floor partners their first years as Resident Assistants so they have a special bond.

“I was perfectly content just being there among such caring and bold leaders on campus,” Shutt said.