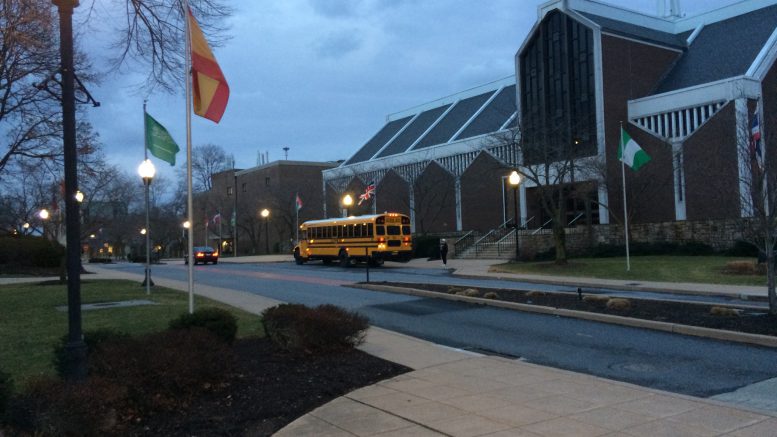 The flags flying on LVC's campus represents some of the countries competing in the Olympic Games.

People, including students here at LVC, have shifted their focus on a worldwide event that for most symbolizes unity and peace in the world.

February welcomed the 23rd Olympic Winter Games in Pyeongchang, South Korea, where 93 countries have sent at least one or more athletes to compete. The Summer Olympics includes more sports than the Winter Olympics, but this does not take away from the athletes who have made it to this world stage. The Winter Olympics has 15 sports and LVC students have their favorites.

The Olympics have been a worldwide symbol of unity since the modern Olympic Games began in 1896 in Greece. The symbolism of the Olympics remains the same.

“The Olympics allows the world to not only celebrate their own countries’ athletes but also other countries,” Bentz said. “It helps the countries get along, even if they do not normally get along.”

LVC has exhibited the spirit of the Games by sponsoring recent ski and snowboarding trips this past month. Metz has also gotten involved in the Olympic spirit as it offered an “Olympic Games Deal” on the purchase of flex dollars to be used at the Dutchmen Den or Intermetzo. The students have their own ways of getting into the spirit of the Games.

“I plan on sporting my USA gear walking around campus,” Michelle Dardaris, a sophomore physical therapy major, said. “Snowboarding is my favorite event and I plan on wearing my USA shirt when I watch it.”

The Olympics are a time that allows the world to focus on athletes from all over the globe. Americans celebrated the success of their winter Olympic athletes, and students shared what the Games mean to them.

“The Olympics let me display my passion for this country, and for that, I am grateful,” Dardaris said.

The Olympics are also a time for history to be made and it was in a few events. In the men’s Snowboarding Slopestyle competition, Red Gerrard, a 17-year-old American male took the gold for team USA. Then later in the men’s Luge final’s, team USA’s Chris Mazdzer, won USA’s first ever medal in the Luge as he brought home silver.

The 23rd Winter Olympics concluded this past weekend on Sunday, Feb. 25.