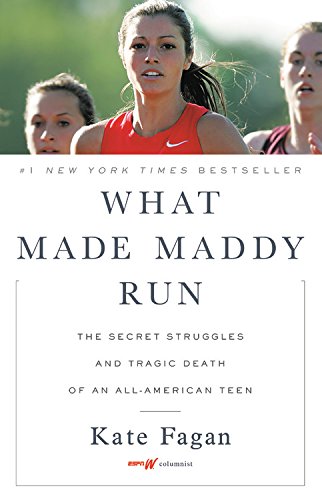 Kate Fagan’s 2017 book What Made Maddy Run: The Secret Struggles and Tragic Death of an All-American Teen attempts to explain what caused University of Pennsylvania freshman Madison Holleran to commit suicide in January of 2014. Holleran seemingly had it all: a loving, supportive family, an extensive network of friends, and success in both the classroom and the track. However, Fagan splices together texts, journal entries, and interviews with friends and family to show that underneath the manicured image Holleran presented to the world was someone grappling with anxiety, depression, and insecurity.

The book is organized in a non-linear structure, with the story switching between Holleran’s ill-fated freshman year at Penn and Fagan’s own experiences. Fagan battled depression and anxiety when she was in college at the University of Colorado, and she explains that these mental illnesses were caused, in part, by the pressure she felt being a Division 1 basketball player. Her recollections of her struggles with these mental illnesses allow her to relate to Holleran’s story in an effective and compelling way, partially because their situations were so similar. In fact, Fagan mentions several times throughout the book that “I think I know what she was going through, because I’ve been through the same thing.” Fagan describes in detail the thoughts that became so dark that she considered ending her own life, and by doing this, she gives the reader insight into the way Holleran may have been feeling herself. Her personal narrative makes it easy for the reader to understand how quickly and completely Holleran’s depression and anxiety overtook her.

The book is strongest when it looks at Holleran’s downward spiral and the factors that contributed to it. Fagan tediously compiled numerous interviews with Holleran’s family, friends, coaches, and associates, and these interviews, combined with Fagan’s vivid writing, help make Holleran’s changes during her year at Penn pop off the page. Sentences like “energy seemed to be leaking from her as if there was a pinprick nobody could find” are highly descriptive and make the reader visually understand the physical toll Holleran’s mental battles were having on her. Fagan also uses these interviews to explain the dichotomy between the way Holleran presented herself to the world, and the way she was truly feeling. The interviews with her friends and family describe a girl in physical decline, but the ones with her track coaches tell the story of “this successful, well-liked person.” Later in the book, after examining Holleran’s messages and social media posts, Fagan makes it clear that this dichotomy is the true theme of the book.

Fagan was granted access to Holleran’s personal computer, and spent over 40 hours looking through Madison’s texts, emails, photos, and social media posts. Her research feels thorough, and she includes numerous text message exchanges between Madison and her friends to help support her conclusions about why she eventually committed suicide. Fagan pulls texts Holleran sent to various friends and family members that explain her unhappiness at Penn, such as “I hate it here” and “I can’t do it anymore… I’m just completely stuck about it all,”, but also uses the messages to portray Holleran’s guarded nature. As she remarks later in the book, “the most important realization I would arrive at was how superficial the medium could be… she sent thousands of messages… and yet little was actually said.” This sentence is representative of Fagan’s larger theme, which is that teenagers are pressured by social media to present a manicured and edited form of their reality to the world, even if they are struggling inside.

Fagan makes this theme clear by arguing that Holleran’s story is representative of these pressures. Along with the interviews and text messages that show the conflicting sides of herself Madison presented to the world, Fagan examines Madison’s posts on social media sites such as Instagram to show how she felt forced to make herself look happy, even if she was not. In one chapter of the book, Holleran’s mother remembers seeing a photo Madison posted on Instagram and telling her that “you look so happy at this party,” to which Madison replied “Mom… It’s just a picture.”

Fagan points out that “College is supposedly about being cool and having fun, and admitting feelings of anxiety, sadness, and helplessness seems like the opposite… Even if [Maddy] was not having the college experience everyone told her she should be having, she could certainly make it seem like she was. Given the prevalence of social media amongst teenagers in current society, these criticisms are especially noteworthy and impactful. They bring into question how much harm social media is doing to young people, and if it is making teenagers more susceptible to repressing their feelings and not expressing their true selves and sentiments.

Notably, Fagan mentions that hours before she leapt off the top of the parking garage at 1501 Spruce Street, Madison Holleran Instagrammed a photo of the glittering lights in Philadelphia’s Rittenhouse Square. As Fagan writes, “this was not a picture of the real world, but a picture of what Maddy wished the real world looked like.” Perhaps Fagan’s description of Holleran’s distorted view of what the world should be like will help save other teenagers facing mental health issues from suffering the same fate.