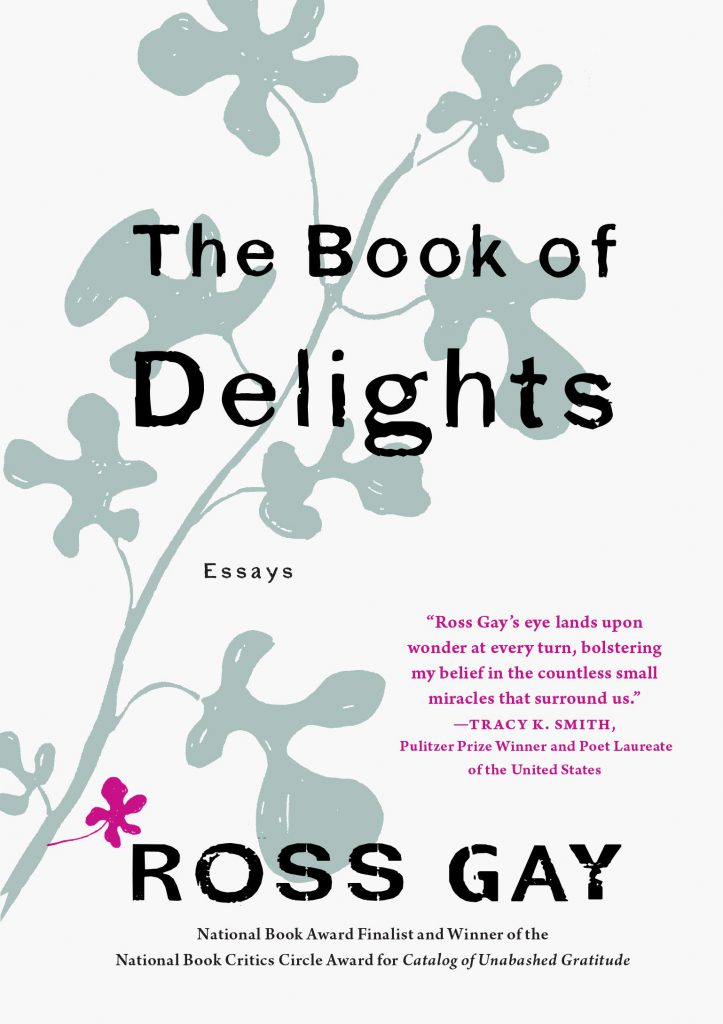 Although he is primarily known for his poetry, Ross Gay takes on the form of essays–or essayettes, as he calls them–to write about something delightful almost every day for a year.  Gay starts this journey on his 42nd birthday, finishes on his 43rd birthday, and fills the gap with nearly one hundred entries.  At times, it appears obvious to the readers that he is a poet as there are many beautiful lines throughout this book, but overall, they feel playful, joyful, and friendly.  These intensely personal, witty, and sometimes humorous glimpses are not only an introduction to Gay’s life but also an invitation to notice the delights that surround us every day.

These delightful entries are diverse but gradually dance around themes such as friends, family, the challenges of living in 21st century America as an African-American, and Gay’s deep appreciation for nature.  Regardless of what Gay writes about, he is equally enthusiastic about the most mundane of subjects.  Some of his entries include insects, specifically a praying mantis on a tabletop “bouncing and swaying, like it’s hearing a music I’m not yet tuned to.” Also featured are “black bumblebees” and how they “shimmy some, swirl their abdomens for good measure, and, exhaling, haul their furry bodies, gold-flecked, to the next bloom for more.”

In a laugh-out-loud essay, Gay discusses dreams.  He finds it delightful to stare at the ceiling sometimes and take the time to recall some of the dreams he has had.  While he does this, he remembers one particular dream where he had been having sex with his mother for two years.  Gay writes: “Just as you would if you just realized you had been fucking your mother for the past two years, I lost my goddamned shit.”

Politically themed essays may not dominate the book, but when Gay chooses a target, he does so with care and makes sure to hit the bullseye.  In one essay, Gay discusses Whitney Houston and his adamant belief that “one of the objectives of popular culture, popular media, is to make blackness appear to be inextricable from suffering,” something he thinks is “clever as hell if your goal is obscuring the efforts, the systems, historical and ongoing, to ruin black people.”  And the delight?  Gay reminds his readers that they have been “reading a book of delights written by a black person.”

Although it is not explicitly stated, Gay’s book shows the human’s need for self-care.  We do not live every day with sunshine and happiness, and Gay does not shy away from life’s hardships.  In a couple of his essays, Gay writes about the tragic death of a family friend who was only twenty years old.  This book acknowledges our humanity and helps both the writer and the reader seek room for delight even when considering dark, complex corners.  In the prelude, Gay writes: “It didn’t take me long to learn that the discipline or practice of writing these essays occasioned a kind of delight radar.  Or maybe it was more like the development of a delight muscle.  Something that implies that the more you study delight, the more delight there is to study.”

Gay’s Book of Delights is a soft reminder to listen, take notice, and enjoy the little things; there’s beauty in the details.